Solitary Bees: 8 facts to know plus an identification resource 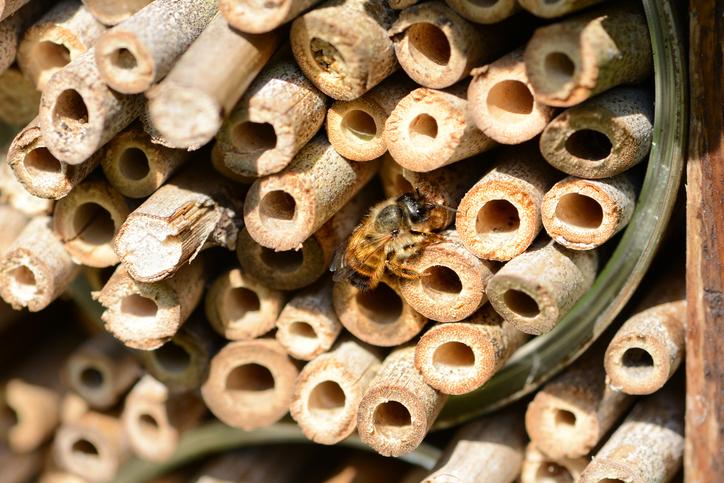 Nine out of every 10 bees are not what you think. Here is a fascinating guide to solitary bees including a list of eight lesser-known facts.

The way myths about bees came about is similar way to the way most people think all frogs make a ‘ribbit’ sound — the media. The only species (Pacific tree frog) that makes that sound is indigenous to California, where early Hollywood movie-makers recorded and repeatedly used the sound for night scenes – hence the widely held belief.

Likewise, most people think all bees live in hives, make honey and serve a queen.

Out of 267 species of bee in the UK, only one is a honeybee, and only 25 species are bumblebees. These 26 species are social and live in colonies. The other 90% are solitary bees — that’s around 240 species. Let’s take a look into their lives so we can learn how to monitor and protect them.

For starters, let’s get some common misconceptions out of the way.  Solitary bees do not live in colonies, do not serve a queen or make honey. They don’t make wax either. Some solitary bee species nest in large groups, and a few have evolved social behaviour rather like bumblebees1, but they generally build individual nests and work alone.

They are not aggressive or territorial, they do not swarm and rarely sting (when the females do sting it’s not painful or harmful to humans or animals). They vary vastly in size, but are generally smaller than the famous, furry bumblebee. As a result, they’re often mistaken for, well, not bees. The Field Studies Council have created a useful laminated field guide to the 28 most common species of bees seen in British gardens to help you spot them2.

Working alone, the female collects building materials for the nests and food for the larvae, then builds an individual cell for each egg. She lays each of her 20-30 eggs on top of a ball of pollen stuck together with nectar. She builds a partition wall, then repeats the process until the tube or hole is full. Then she closes it with mud, leaves or fine hairs before moving on to the next tube. (This is in stark contrast to most bumblebees and honeybees, where the queen lays the eggs and a team of other bees work together to look after them.)

The female solitary bee’s eggs hatch into larvae, eat the pollen and enter hibernation, staying in the cocoon for around 11 months throughout the summer and winter. The following spring, the larvae pupate, turn into adult bees and emerge from their nest. Once outside of the nest, the average lifespan is a brief 4-6 weeks.

Unlike male drone bees in a bumblebee colony, male solitary bees only have one job, and you can probably guess what that is – yep, they mate with a female, then die. But the female is equally cut-off from the nurturing process, because, once she seals her last cell, her job is done too; she plays no further part in the lives of her young.

Contrary to popular belief that the honeybee is the best pollinator all our plants, flowers and trees, solitary bees outperform these larger species hands down. They don't have pollen baskets on their legs (unlike social bees), so they lose much more pollen as they fly, making them the star pollinators of the bee world. A single red mason bee3, for example, pollinates 120 times more4 flora than a single worker honeybee.

Solitary bees make nests in hollow stalks and tubular holes in soil, sand, clay, mortar or wood. Around two thirds (70%) are known as mining bees4. They make homes for their young in underground holes, tunnels and burrows (whether soil, sand or clay), with habitats including:

They also make nests in tunnels bored into dead wood by beetles or woodworms. 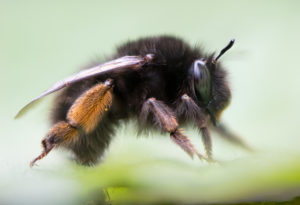 One of the most prevalent species is the hairy-footed flower bee5 (Anthophora plumipes), which has a similar appearance to the bumblebee (but a different, more erratic, flight motion). These hairy-footed bees can nest in large, noisy groups. Nests tend to be shallow hollows in soft mortar, cob walls, exposed vertical soil walls or soft cliff faces; and sometimes in compact clay soils. Other species include ashy mining bee6 (Andrena cineraria), the tawny mining bee7 (Andrena fulva) and mourning bee8 (Melecta albifrons).

Alongside mining bees, the other main grouping of solitary bees is the cavity nesting bee, which makes a home out of dry, hollow stems of wildflowers or dead plants like brambles.

Despite being sealed within their own cells and sealed within a larger nest, the larvae of solitary bees are far from safe. While the female is away from the nest, they are under threat from ‘cuckoo species’ (which lay eggs in other bees’ nests), kleptoparasites (which steal food from other species) and parasitoids (which eat the host). Some of these parasites9 (certain species of bee, wasp, fly and beetle) are all three. They have all sorts of techniques from simply walking into open nests or ‘bombing’ eggs into nests from above, to slicing through closed entrances and drilling through walls. However they get in, it always ends badly for the host larvae.

The Nomad bee (Nomada spp.) female lays an egg inside the open nests of mining bees. When it hatches, the Nomad bee larva eats the host bee’s egg along with the food stores. The female Blood bee (Sphecodes spp.) breaks into a sealed nest cell, destroys the host egg and replaces it with one of her own before resealing the nest. Sharp-tailed bees (Coelioxys sp.) prey on the larvae of Leafcutter bees (Megachile spp.) by slicing through the leaf wall entrance of the nest with the razor-sharp tip of their abdomens and laying their own egg. The larva crushes the host grub before eating the pollen ball.

The Gasteruption jaculator wasp drills its egg-laying tube (ovipositor) through nest walls of the Mason bee (Osmia spp.) to lay its egg, which feeds on the host bee grub.

Bee flies (Bombylius spp.) are known as ‘bomber bees’ due to the way they gather soil or sand on their abdomen, hover above open nests and drop eggs into the tube (the sand or soil adds weight to the egg). Bee fly larvae hatch and share the food with the host larvae before eating the host.

The larvae of the Oil beetle (Meloe spp.), called triungulins, climb to the top of the nearest flower after hatching and jump aboard a female solitary bee, literally stowing away to hitch a ride to her nest. Once at the nest (you guessed it) they devour the food stores along with the host larvae.

Food sources for solitary bees include wildflowers and fruit trees. But solitary bees can't fly as far as honeybees to forage and, because of their size, they are more choosy about what they can feed on. Unfortunately, so-called ‘bee plants’ and ‘bee-friendly seed mixes’ are aimed at beekeepers and the honeybee (which is only one species out of 267), so some of these plants may not be suitable for many types of solitary bees.

So, to create new habitat for solitary bees, it’s wise to follow the Bumblebee Conservation Trust’s five simple actions10, which include letting your garden grow wild and planting a wide variety of flowers, shrubs and trees.

Perhaps the only thing these bees do share with other species is that their habitats are under threat from wide-scale industry, agriculture and urbanisation. The use of pesticides has contributed to the depletion of many insect species, while intensive farming and sprawling construction have destroyed forests, hedgerows, wildflower meadows and other habitats.

According to the online site of Science magazine 11, the German amateur group Krefeld Entomological Society found “dramatic declines” of insects. The New York Times refers to its findings as “insect armageddon12” after populations they tested had declined by more than 75% over the last three decades.

The British Bee Coalition13 says that, in the UK, we have lost an estimated 97% of our wildflower meadows since the 1930s. It cites the recent European Red List for Bees14 which shows that nearly one in ten species of wild bees are facing extinction. The State of Nature 2013 report15 shows that 52% of UK solitary bees have declined in recent decades. It adds that more than half of the bee, butterfly and moth species studied have declined over the last half a century.

7a) Monitoring bees for conservation

With the loss of insect habitats becoming a growing concern, it’s even more important to monitor solitary bees. One of the many methods (which requires minimal preliminary field work or expertise) involves collecting bees from flowers with an . Like any monitoring project, it’s important to standardize variables like numbers of plants sampled, time frame used and size of aerial net. 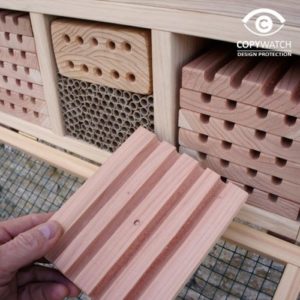 With some degree of expertise and background field experience, you can monitor plant species that attract only a specific species. Like the first method, these plants can provide instant data on presence, relative abundance or absence of specific bee species in an area.

As well as monitoring bees in the field, we can create extra places for solitary bees to nest. And there are lots of easy options. But...

Due to the media frenzy about loss of bee habitats, the ecology supplies market has been flooded with all kinds of bee hotels, condos, houses and nests. But many are just not suited to solitary bees.

For example, some, which are made abroad for other species, are just too big. To make sure you get the right product, look for a product from a reputable UK supplier, for UK solitary bee species.

Also, unless you specifically need them for educational purposes, for example, avoid nests with glass or plastic tubes as condensation and fungus can build up. Steer clear of nests with no solid end wall, or make sure tubes tightly back onto a wall or piece of card. And, for wooden nests, check for splinters.

To create a hotel, house, box or nest for solitary bees, you can drill holes in logs and blocks or wood, or group 6-8-inch bamboo cane or cardboard tubes lengths into cylindrical containers and hang on the side of a fence or shed, ideally south-facing. But do make sure you check cells for dead larvae, mould and parasites after they emerge. And in Autumn clean out any closed tubes from the previous (not current!) summer as the young bees inside will have perished.

If you’re using artificial nests, some tips for monitoring them include:

Here are some tips for managing your bee nests, along with some instructions for a simple DIY bee house16.

If in doubt, you can buy a concrete bee brick, a set of eco nesting tubes, an insect house or, if you're feeling stylish, this concrete planter with bee hotel. 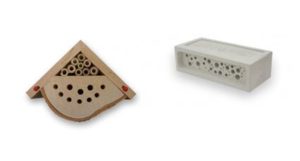 Thank you for reading.

If you liked this post, subscribe to our newsletter and we’ll let you know when the next one is published on our blog. In the meantime, you could browse our products for solitary bees.

11 Science. Where have all the insects gone?

16 The Pollinator Garden. How to Make and Manage a Bee Hotel.