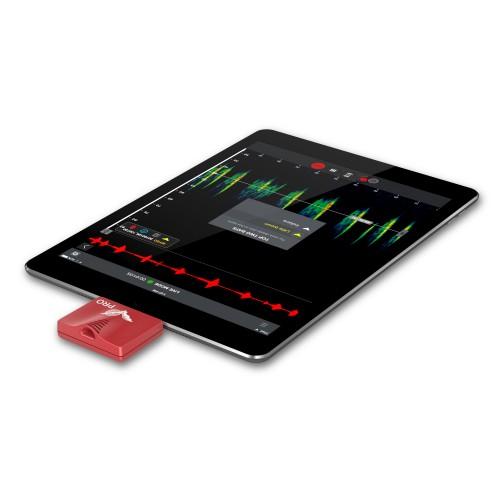 Bat detection and analysis for YOUR iOS devices!

no need to carry a bat detector with you anymore!

The Echo Meter Touch has all the tools you need to identify species in the field on your Apple iOS device.
• Stunning, full color, zoomable spectrograms.
• Ability to listen to bats in real time with unparalleled fidelity.
• Recordings that match detectors costing thousands of dollars more.
•  Onboard bat auto-identification using our Kaleidoscope algorithms.
• The number crunching power to accurately identify a bat to species in seconds.
• GPS tracking that tags all recordings with location information.
• And did we tell you it all works on the iPad, iPod Touch and iPhone?

Tell me more about the Echo Metre Touch Ultrasonic Module?

It is a tiny ultrasonic module that is made up of –
• Ultrasonic sensor (mic)
• Preamp
• Gain circuitry
• Analog-to-digital converter
• Microprocessor which feeds the data to the iOS device in real time.

When I purchase the in-app’s can I use it on more than one iOS device?

Yes this can be done, if you are logged in under the same username in the app store. You can then put the in-app purchases on up to five iOS devices. The app viewer which is free can be used with hardware with no limit and can be placed on as many devises that you what to use it on.

Will the Echo Meter Touch be available this year?

We are hoping for the Echo Meter Touch to be available this year! It will probably be more towards the end but could run into early next year.

Is the Ultrasonic Module weatherproof?

Well the ultrasonic module is designed to be attached to an iOS device, which they are not weatherproof! The element itself in the microphone is reasonably weather resistant along with the circuit board that has a weather resistant coating on it.

Is the Ultrasonic Module compatible with an extension cable off the iOS device?

There is something on the market from a third party called lightning extenders which will work with the Echo Meter hardware which will increase the module a few meters. This unit are not Apple APPROVED and they are not recommended.

Which countries can the Echo Meter Touch be used in?

What is the sample rate of the Echo Meter Touch?

256kHz which allows recording echolocations up to 128khz.

Can the files be converted from full spectrum WAV to zero-crossing files?

Yes you can, this is a quick convert, which you can use the free Kaleidoscope converter on any PC, Linus and Mac.

Can I and how do I transfer any recordings to my computer for archiving and further analysis?

This can be done via Wifi network (WiFi Export in-app) and a web browser on any computer.

Can the Echo Meter Touch log the GPS location of any recordings and my path?

The Echo Meter Touch will log the recorded location if your iOS device has GPS enabled on it. A iPad that is cellular-enabled and iPhones will log the GPS location and the path. A Bluetooth GPS module can be purchased if you do not have GPS on your iOS device. If you do not Bluetooth GPS then your recordings will be tagged with the location and path. The path will not be exported, but this might be something that can be done as an upgrade at a later date.

Is the Echo Meter Touch available on Android?

No it is not available on android.

Which Apple products will the Echo Meter Touch work with?