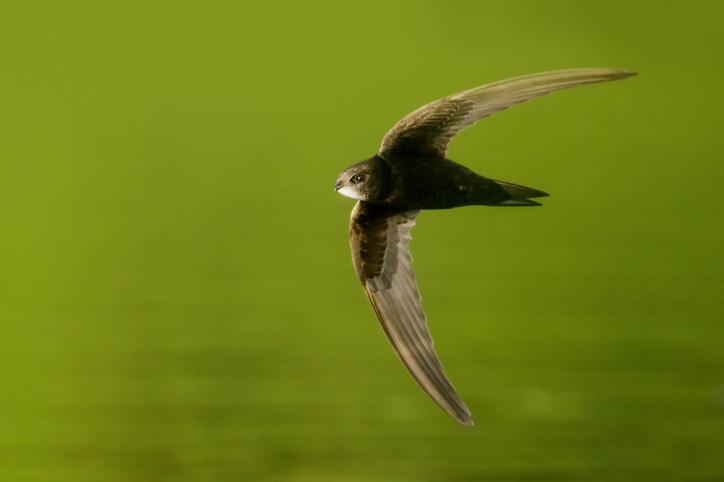 As natural bird habitats diminish, nest boxes are one way for us to give declining bird species a helping hand.

This series covers the wide variety of bird boxes available, and how you can use these to protect birds from the elements and predators so that they can roost, feed and raise chicks successfully.

These small, drab birds are easily mistaken for swallows and house martins, which also have forked tails and streamlined bodies. However, you can identify swifts by their larger size and long, sickle-shaped wings. You also won’t be able to miss them with their high-pitched calls that give them the name of ‘Devil Screechers’.

Swifts are exceptionally good fliers that rarely land except to nest, and even have the amazing ability to sleep on the wing! Although swifts escape to warm African climates during the winter, they return to Britain to breed every spring.

Swifts are creatures of habit as they pair for life and tend to return to the same nest site year after year. They are a gregarious species that nest in colonies. Nesting season starts between May and July and they lay 2 or 3 eggs over two to three-day intervals. Their incubation time is longer than many birds at 19–25 days and, dependent on weather conditions, the nestlings leave the nest after 37 to 56 days

The overall world population of swifts is around 25 million of which around 87 thousand pairs bred in Britain in 2009. However, the swift population in Britain has halved in the past 20 years, due to the loss of their nesting sites in old buildings, and a general decline in their insect prey.

Swifts nest almost entirely in older buildings, which makes them very vulnerable to conversions, refurbishments and demolitions. The worst threats to swifts are modern building practices such as  plastic gable end cladding, the use of flat roof tiles, and blocking nest sites with scaffolding and building wrap.

If you own or are working on, a property that is used by swifts, it’s best to avoid building work during nesting season. When re-roofing is being done, you can preserve nest sites by making new nest holes to match ones that were there previously, or fitting a new swift box nearby.

Unfortunately, many swifts return to Britain in the spring to find that their nest has been destroyed, with no replacement.

It’s very important to choose a box that will attract this unique species. Swifts commonly nest in colonies on buildings and need boxes with just the right dimensions. Swift boxes can be integrated into a wall or retro fitted extension. Nest moulds are also used as a stable foundation for their nests to stop the eggs from rolling away.

There are some great examples of these bird boxes which demonstrate how they can be incorporated into the structure of a building. These are usually bolted high up on to stable surfaces and can be found at the top of buildings.

Below are three of our top suggestions: 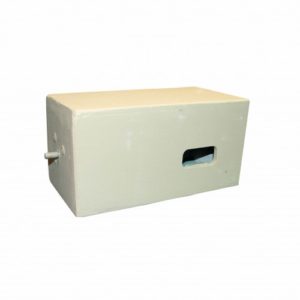 Genesis swift nest boxes are widely used in Ireland, and are now available in the UK and the rest of Europe exclusively through Wildcare. They have been designed with input from experts at Swift Conservation Ireland and other conservation bodies.

The Single Swift Box is designed to be mounted on an external wall and comes with stainless steel bolts and screws, and an aluminium mounting bracket.

It is painted on the outside with an undercoat of insulating paint to help reduce temperature fluctuations in the nest. This can be painted over with a water-based paint to match the wall colour. 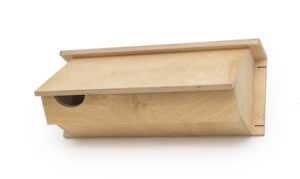 Designed specifically for Swifts, this traditional Wooden Swift Nest Box with a sloping roof, is a single chambered box and has a semi-circular entrance hole at the front of the box. 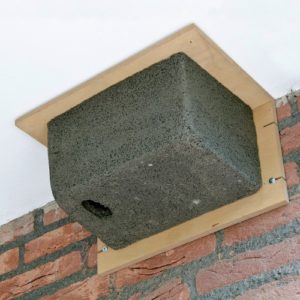 This swift WoodStone® nest box is part of the Vivara Range, constructed from a mix of concrete and wood fibres. This mix of material ensures longevity for the box in comparison to a traditional wooden nest box. It also ensures the nest boxes safeguard against attacks from predators including woodpeckers, cats and squirrels.

The entrance of this nest box is sited on the underside which deters Sparrows and Starlings.

There is an opening at the back of the box for easy cleaning, and the nest entrance is on the underside. In our tests, the Swifts preferred this sort of entrance, but Starlings and House Sparrows were discouraged from occupying the box.

Fitting and Maintaining Your Box

Swift boxes should ideally be positioned at least 5m above ground, under an overhand or eaves for protection. Take appropriate precautions when working at height, especially with a heavy nest box. Boxes should face in a North Westerly or North Easterly direction to shelter them from the glare of the sun.

Swifts fly straight into their nesting areas, so there should be a clear adjacent airspace. Predators (mainly cats, magpies, crows, squirrels and rodents) should not be able to access the boxes, so they need to be kept away from branches, climbing plants and aerials.

Swifts leave very few droppings externally, and their nests should not need to be cleaned unless used by another species. However, over the winter you might want to check that any fixings are still.

Remember that swifts are protected by the Wildlife and Countryside Act 1981, making it illegal to damage an active nest site.

Attracting Swifts to Your Box

Recordings of swift calls can be played during the nesting season to attract the birds so that they choose your box as their nesting place.

Genesis Swift Boxes have provided the following advice to attract swifts to your box:

It is essential to play the attraction calls to help Swifts find nest boxes. The calls should be played from May 1st to 31 August.

Please note the BASS dial should be set to minimum and the Treble dial at Maximum. Volume should be no more than ¾.

Want to help British birds? If you would like to protect swifts in your home, garden, or building, view our swift boxes here.