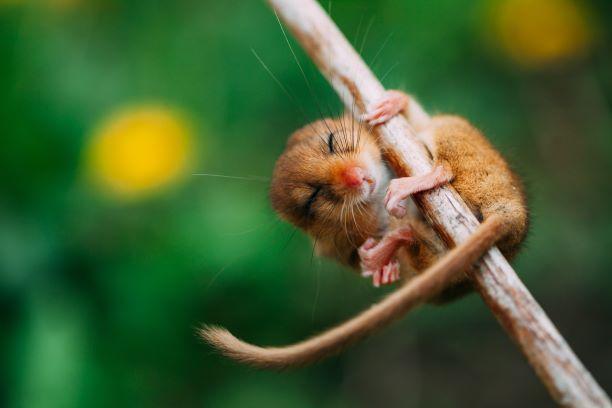 Once a widespread small mammal, the distribution of Muscardinus avellanarius (Hazel or common dormouse) has declined since 1885, due to fragmentation of habitat after changes in land use, inappropriate habitat management, and changes in the climate. In response to this decline Natural England published a review entitled The Dormouse Reintroduction Programme (NECR144, 2014), in which they highlight the fact that M. avellanarius would require help in reestablishing populations in areas, due to its vulnerability and restricted range. This review was written to indicate the best course of action and to inform the delivery of Biodiversity 2020.

This was by no means the first attempt to reintroduce the species. As stated in the review, this started to take place in the 1990s under the direction of the Nature Conservancy Council and English Nature. According to the author Paul Chanin there are six key stages to reintroduction, namely: site selection, captive breeding, veterinary procedures, release, short term care, and long term monitoring.

It was noted in 2011, some years after the first reintroduction, that this method successfully: exceeded a 1995 BAP target to re-establish populations in five counties; promoted engagement with the conservation of the species; maintained a good level of coordination of government and NGO bodies; and encouraged appropriate woodland and hedgerow management. The report contains some very impressive distribution maps demonstrating the success of the project over time. The NBN atlas is also a good source of information on specific reports, distribution mapping, and graphical data.

A few years later, a news story in 2016 reported on 'how the dormouse is returning to England's hedgerows after 100 years', marking the reintroduction of M. avellanarius in the Yorkshire Dales National Park. In the article Ian White of the People’s Trust for Endangered Species (PTES) - an organisation who have been instrumental in the reintroductions - stated that management of woodlands stopped after World War II and that woods have been commonly used as areas for recreation since then. He stressed that M. avellanarius benefits from habitat management and the cessation of these activities resulted in the species suffering from substantial losses. The article concluded that the successful reintroduction of M. avellanarius may provide a positive outlook for other proposed reintroductions of lynx, beavers, wolves, sea eagles, and wild boars.

Last year, on 20th November 2019, the People's Trust for Endangered Species published a report revealing that populations of M. avellanarius has declined by 51% since the millennium (3.8% decrease per annum). Once again it was stressed that the correct habitat should be provided in order for this species to survive.

The habitat M. avellanarius require is one that is arboreal in nature, with a contiguous set of ecosystem elements. This includes: ancient or aging trees with holes that act as a nesting place; a shrubby understorey that is ideal for feeding; and hedgerows and bramble banks which act as corridors to the wider landscape. In addition to this it is advisable to create clearings, undertake small scale felling, control invasive species, protect coppice, and retain old features such as old hazel, dead wood and log piles. This is something that every Countryside Manager is no doubt instilled with the knowledge that habitat management should promote biodiversity through the provision of niches that can be occupied by a variety of species. In the case of woodlands the layers from ground level to the upper canopy ought to be managed in a manner that is sensitive to all occupants whether they be microbe, fungus, plant, or animal. Futher to this it may be of interest to read the PTES guidance on Managing Small Woodlands for Dormice.

However, something is going well! As clarified by NBN, there is good news to be celebrated in the form of the report declaring that M. avellanarius populations have improved in certain areas. 29% of sites had achieved 'stable' or 'increasing' populations with 8% of sites reporting an annual increase of 5%. In their news story, NBN, expressed their gratitude to the hundreds of volunteers that were critical in the collection of 120,000 records between 1990 and 2019. The PTES were also thanked for their tireless management of the National Dormouse Monitoring Programme (NDMP), which as they state is the 'longest-running small terrestrial mammal monitoring programme in the world', with 30 managed reintroductions at 24 sites.

If you are interested in the study of M. avellanarius we have various products that may be appropriate, including Dormouse Nest Tube & Insert, Dormouse Box with lift off roof, Dormouse box with sliding roof, and Dormouse Footprint Tracking Kit which has been designed in accordance with a new method for dormouse surveying developed by PTES.

Read more about The Dormouse & Conservation in our previous post