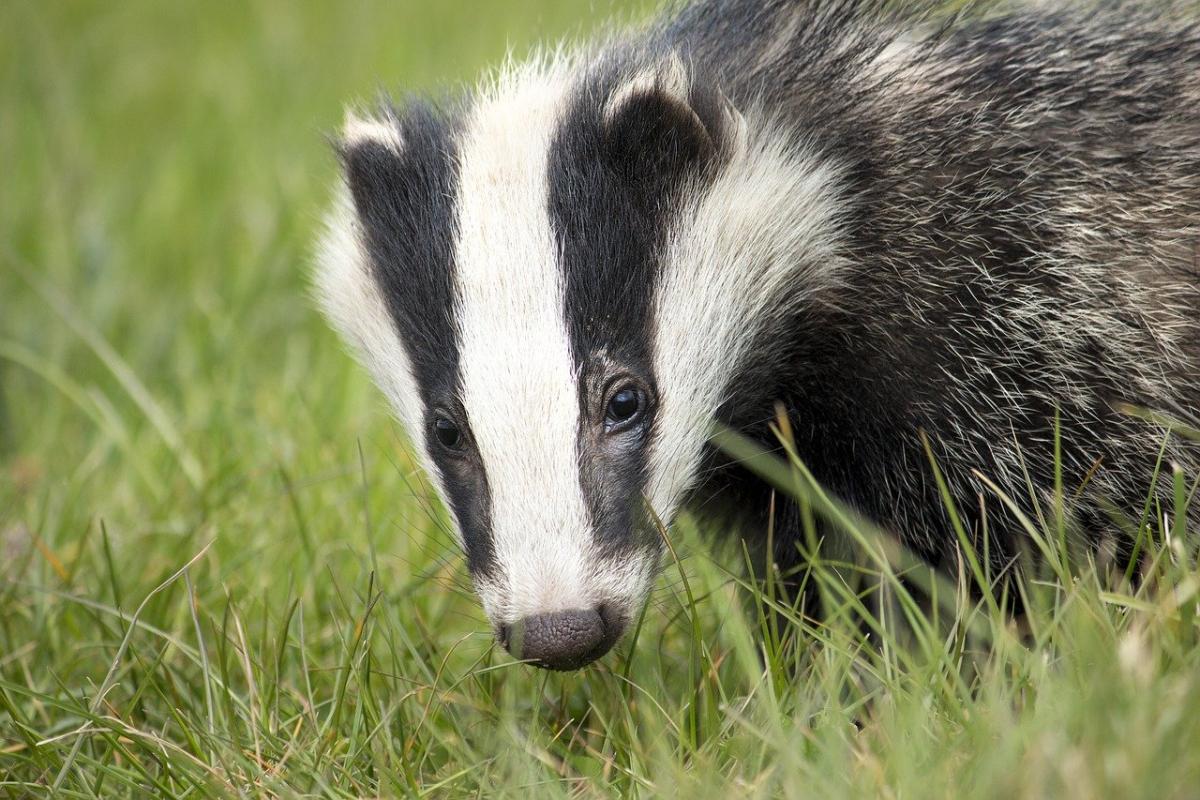 A badger cannot be mistaken, with streaks of white marking its black-grey furred face, and its stocky build. These animals, better known by ecologists as Meles meles are embedded in the natural history of the UK and have been for many years. Historical place names Brock, Pate and Grey are steeped with links to badgers. Indeed, badgers have been linked to a landscape from 10,000 year ago, when they coexisted alongside Arctic Fox (Alopex lagopus), Wolverines (Gulo gulo), and Reindeer (Rangifer tarandus).

Meles meles is a member of the weasel family (Mustelidae) and is rarely seen due to their nocturnal nature. Despite their elusive nature, the badger is a very sociable creature and loyal to their home ground, living as part of a large clan in setts. According to the Woodland Trust, these 'house proud expert foragers', can occupy the same sett and use the same well-trodden paths for generations. The sett, which is often located in woodland bordering meadows, is a remarkable feat of engineering, with numerous entrances and a network of tunnels leading to nesting chambers. Their association with being house proud is due to the fastidious maintenance of their sleeping quarters. According to the University of Exeter, the badger roll their frequently renewed bedding, of grass, straw and bracken to dry it out and prevent parasite infestation. They also utilise 'outdoor' latrines that act as a marker to the boundary of clan territory. In 2016, Fisher and Dunand undertook research into the 3D topography and structure of three, 30-50 year old setts. Their findings demonstrated the badger's ability to construct dozens of entrances leading to hundreds of meters of tunnels. Fisher and Dunand described the sett as dynamic and ever changing in structure, with new tunnels and chambers being created, and those falling into disuse being replenished and reused again later on. Furthermore, the researchers referred to badgers as ecosystem engineers, that can not only create extensive living and socialising areas, but change plant and soil composition. In a state of active sett engineering, the badger can displace a vast amount of material, whilst excavating soil from lower down in the soil profile. Meanwhile, they add nutrients into the system, during their visits to latrines. In undertaking these activities, they increase species richness of herbaceous plants, and provided an opportunity for bryophyte species, that are indicative of disturbed areas, to take hold. Indeed, they also aid an increase in the species richness of fleshy-fruited shrubs and trees, which were attributed to their mostly carnivorous diet.

If one were to commence a study on badger behaviour there are some key signs indicating their presence in an environment.

Setts: as mentioned above, badgers construct a network of tunnels and chambers that they occupy for many years. It will be no surprise to find them by following prominent, well-trodden, paths - the result of paws padding up and down as they tread their thoroughfares. The sett entrance is semi circular and normally 25-35 cm in diameter. Outside the sett there will inevitably be a mound of earth that has recently or long since been excavated. In addition to these architectural features, it may be possible to find their latrines or dung pits heaped with a number of large black-brown-grey droppings. Apparently the smell is quite distinctive, owing to its use as a territory marker. These boundaries can be defined by baiting a food mixture of peanuts and molasses with colourful pellets, which pass through the Badgers gut. The bait needs to be placed outside the sett entrance, with a different pellet colour for each sett. Wildcare can provide 8 different colours of bait marking pellets (orange, red, blue, purple, yellow, cream, grey, green) in 1kg tubs. In addition to pellets, badgers can be surveyed with trail cameras. Indeed, if you want to know more about this tech you may find an earlier blog post on Common Trail Camera Features interesting.

Pride for home: As the badger is house proud and frequently changes its bedding you will also find grass, straw and bracken deposited outside an entrance. In order to replenish their bedding with ease the sett is likely to be sited near an area in which these resources are plentiful. As well as being 'domesticated', the badger likes to clean and sharpen its nails, and so close scrutiny of trees and rocks will reveal claw or scratch marks.

Nocturnal wandering: Treading carefully and looking towards the ground on a wet muddy day you will inevitably spot various tracks. If a badger has been around you will note a print around 35 x 45 mm in size. The shape will be reminiscent of a kidney with a row of five toe pads and claws extending from the palm. If you are interested in identifying tracks the guide to British mammal tracks and signs is useful. Take care when identifying the badger's print, as the way that they walk can often cause it to smudge. Another clue that a badger has been in an area is the presence of hairs on fences or vegetation. Indeed, you may also find signs of digging for food.

If you are undertaking a professional survey you should monitor a sett for around 4 weeks, using footprint traps of sand or soil, inserting hair-catching sticky-tape covered sticks into the ground outside the sett, and using the camera traps as mentioned above (please note licence requirements referred to below).

If you are an amateur and want to catch sight of a badger then you may be lucky enough to see them before sunset on a warm summers evening, or for more of a guaranteed experience it may be worth joining a Local Badger Group.

The conservation of badgers is important due to their historical legacy as one of the species that defines the UK landscape. Both badgers and their setts are protected by law, in England and Wales, under the Protection of Badgers Act 1992. Ground-working and agricultural activities are primary disturbances to badgers. Any activity that can disturb a badger should be avoided, however, if it is unavoidable then a licence to interfere with a sett needs to be sought from Natural England. A licence is also required to undertake research, surveys, and carry out TB control. Before the disturbance of a site is considered it should be surveyed for badger presence and usage with negative effects to being mitigated.

Mitigation and compensation measures include creation of foraging or watering sites and encouraging habitat connectivity. Excluding badgers from a site (not sett) can be achieved with badger fencing. If badger sett destruction is totally unavoidable, then it is necessary to ensure that the clan is able to access another one of their setts (demonstrable through pellets). If needed, then an artificial sett should be built, and should be occupied by the clan before they are excluded (by wooden or metal gates) from their original sett. Full information on this can be found within Government guidance.

Some interesting sources of information for your perusal