Warmth on the frosty days - Bats 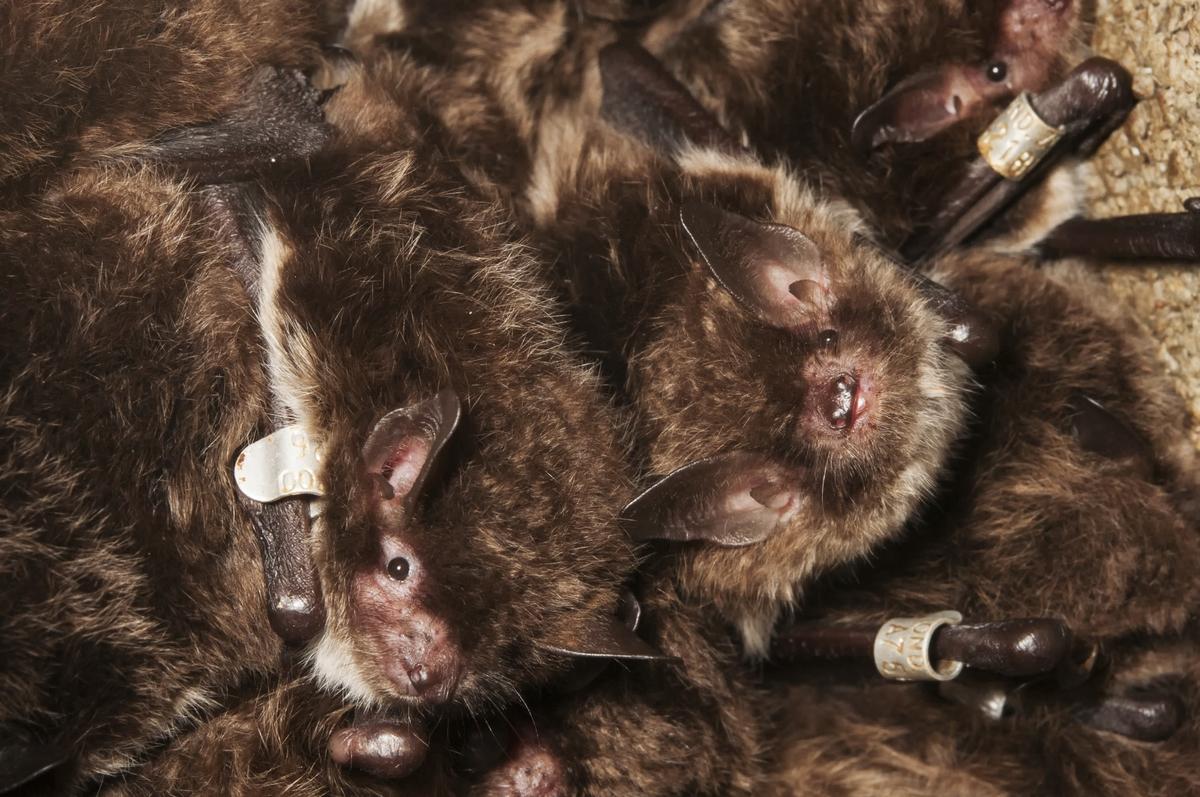 Hibernation is a period of time that frogs, toads, dormice, hedgehogs, bats, mason bees, queen bumblebees, and butterflies are in a state of inactivity.

Animals tend to hibernate to conserve energy until conditions are suitable. Today we follow the story of the Bat.

In the winter months, bats go into a state of torpor in November and stay like that until around March when some may begin to emerge and feed. During torpor at low body temperatures, a bats heart rate can average below 40 beats per minute in as little a one hour. A slowed down metabolic rate allows the bats to survive on fat stores, thus allowing them to get through a tough period of time when resources are sparse.

They usually need roosts that are not prone to temperature fluctuations, however, are known to hibernate an array of microhabitats, such as underground sites, disused buildings, and old trees. It is interesting to know that three-quarters of UK bats roost in trees, or in man-made structures when suitable tree spaces are limited. We know where some species of bats go during winter, however, some are more elusive. The Pipistrelle, for example, is one of those species that seemingly disappear into thin air. The hibernation roosts that have been found don't account for the vast numbers that fill the summer sky!

When the hibernation period is over, bats undergo passive rewarming, which is suggested to be conducive to optimising cardiac performance and a quick arousal from torpor whilst reducing energetic costs.

What are the best ways to help support these species?

We have 18 species of bat in the UK, which equates to a quarter of our mammal species. These bats can be victims of habitat destruction and the use of chemical control which reduces insect populations. Bats need a safe place to roost, commuting routes and areas to forage, in order to maintain population size.

Support insect populations by providing a range of flowering plants that support both diurnal and nocturnal insects. Flowers that release their scent in the evening are a good way of attracting these species. It is always good to encourage diversity by planting a range of herbaceous plants, shrubs, grasses, and trees. Reducing your use of chemical control also goes a long way! Some examples of night-time nectar providers include Argentinian vervain, Buddleja, common jasmine, evening primrose, globe artichoke, Hebe, honeysuckle, and tobacco plant.

If you are interested in identifying moths, or other species of insect we offer a range of FSC fold-out laminated charts, which are splashproof and robust for use outdoors. The hawkmoth chart has 8-panels with illustrations and identification notes on the adults and caterpillars of all 18 identified British species.

Provide space for bats by making your loft bat-friendly or providing external structures for roosting.

A variety of boxes can be purchased to support bats during the winter. Some like the Timber Hibernation Box are made from thick FSC certified softwood, whilst others, like the Schwegler range, are made from a woodcrete material that consists of wood fibres and concrete. Some are designed to hang on walls or trees, whilst others like the 1WI bat box are designed to be installed flush with the external faꞔade or under the render so only the entrance remains visible. Some boxes, such as the 1WI and the 1WQ are for dual-use during the summer and the winter, and so are good options for all-year use.

As we come out of winter it is a good idea to install some boxes for use whilst the bats are active. Some of our popular bat boxes fulfill a range of uses. The Chillon is made from woodstone (which has a similar construction to woodcrete), and is designed to provide a large crevice that can accommodate a colony of 15 pipistrelle bats. The Wildcare Kent bat box has a range of crevice sizes, to allow for different species and temperatures. The range of microclimates within this box is ideal for bats who like being able to move between temperatures. The Habibat 001 is another example of a bat box that can be built directly into a property. It is designed for maternity roosting and can provide a stable environment for bats and their offspring. Lastly the Schwegler 2F is available for a number of cavity dwelling bats, such as brown-long eared bats and Myotis species. This is but a few examples of the bat boxes that are provided by Wildcare.

Get involved - if you are interested in learning more about bats, why not join a local group? These groups should still be running in a virtual capacity despite the pandemic.

You could also get involved with the National Bat Monitoring Programme which is run by the Bat Conservation Trust. Any member of the public can help to gather information that can be used for the ongoing monitoring of UK bat species. Contact the BCT here.

In order to fully immerse yourself in the world of bats you may want to consider getting a bat detector. They come in all sorts of shapes and sizes - from a starter kits to professionally used units. They also come with accessories and software if you want to analyse your data. You can find the hand-held range here. We would love to hear from you if you have any questions (01451 833 181 - sales@wildcare.co.uk).

Learn more by treating yourself to a book:

Or by having a listen to podcast BatChat which is presented by Steve Roe and aimed at the wider bat conservation community.

Check out our YouTube videos - if you are a bat worker we have created a YouTube playlist in health and safety, which includes information on risk assessments, lone working, going underground, working at height, waterways and water bodies, and disease.

You may also want to have a look at the BCT YouTube channel too.