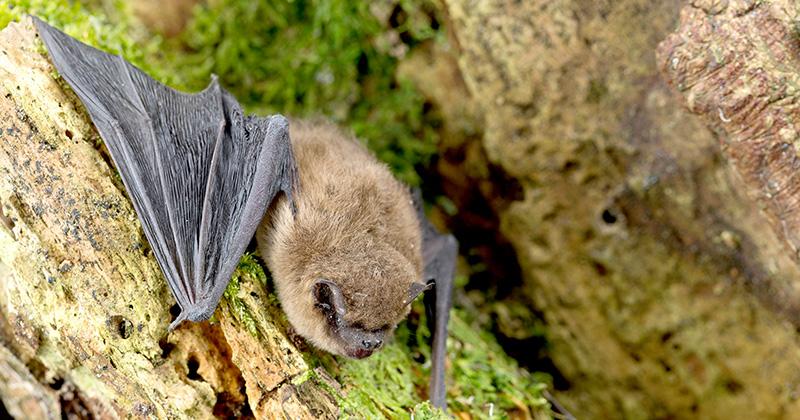 Have you ever wondered why there are so many types of bat detectors?

In its simplest form, a bat detector recorder is a device that converts an ultrasound, which bats emit to echolocate their prey and navigate their environment, into a frequency that is audible to humans (Figure 1), and/or records the bat calls so that they can be analysed later in software.

It is worth noting that hertz (Hz) is the number of waves that are completed per second, and so bats produce 20,000 to 200,000 complete waves or vibrations per second! This means that the wavelength of ultrasound is short as denoted by the tightly packed configuration of peaks above. As a direct comparison, whales emit infrasound which is generally low-pitched and designed to be transmitted over long distances due to the sound’s long wavelength.

The ability to emit lots of vibrations per second enables the bat to calculate the distance to an object accurately and quickly in a certain area (e.g. a foraging spot). Bats do this by producing high-pitched sounds by contracting their larynx or clicking their tongues. Species can be defined by the frequency (Hz), loudness (decibels), and duration (milliseconds). The sound that they emit can be fairly loud, so the bat has the ability to ‘quieten’ this sound as it goes out and then make sure they are ready to hear the sound as it bounces back after hitting an object. Read more about how bats are adapted to echolocation here in this Scientific American article.

The bat detectors that Wildcare supply cover a range of 5 to 250 kHz. The bat detectors fall into two main categories: hand-held and static. The former includes Frequency Division, Active Full Spectrum, Heterodyne, and Time Expansion, for active monitoring. Whilst the latter consists of Full Spectrum Static and Zero Crossing Passive, for passive monitoring. Reviewing the range, the frequency range that they are capable of picking up varies greatly. If you are interested in the technical specifications of the range of hand-held and static bat detectors and recorders that we offer, scroll down to the bottom of this blog (Table 1 & 2).

Heterodyne detectors are the go-to if you are a beginner, as they tend to be affordable and easy-to-use. However, heterodyning can still be used by professionals alongside other methods. These bat detectors work by converting ultrasonic bat calls into distinctive sounds in the audible range so that operators can use this information as well as visual clues to distinguish between a range of species in the field. From a technical point of view (Figure 2), the operator tunes the detector to a frequency of their choice. These detectors have a bandwidth of ±8khz around this tuned frequency (A). The operator may choose to constantly tune the detector (much like adjusting a radio to get the most static-free transmission) to get the best signal or capture a wider range. The detector uses the frequency of the bat call (B) and adds and subtracts it to and from a set internal oscillator frequency (C). This essentially creates a band (D), with the high-pitched part being inaudible (disregarded) and the low-pitched part being audible (E).

The downside to these units is that they detect bat calls within narrow frequency ranges, and whilst the operator is there in the field. Any observations of frequency need to be recorded manually in the field as it is not possible to record this output for analysis later. It is worth noting that ultrasound is directional and therefore locating bats increases with success if the bat detector is pointed ‘head-on’ in their direction. Once a direction has been chosen, the frequency can be fine-tuned, get a strong signal.

If you are looking for something that can record sounds for post-visit analysis why not take a look at the Frequency Division range. Some models have dual modes & also have heterodyne functionality.

These affordable devices capture sound continuously & save a fuller record of a bat's ultrasonic call for post-visit analysis. Unlike Heterodyne devices they detect all frequencies within the range that the bat calls in real-time. These features mean that operators are unlikely to miss a bat.

They work by taking a bat call (A) and turning it from sinusoidal to a square wave (B) before it undergoes a divide-by-10 process and amplitude modulation. The output (C) is audible because the sound is within the 2-12kHz range. It is worth noting that square waves are not as easy on the ear as a sinusoidal wave. Bat detectors have various ways of dealing with noise (Figure 3).

Frequency Division devices are good if a recording over a length of time is required for analysis later on (although bear in mind that a separate recording device is needed).

On the downside, frequency division does not keep the tonality of calls - calls lack resolution/detail and cannot always be clearly identified. A good solution to this is to choose a bat detector with dual functionality of heterodyne and frequency division. This gives the operator the chance to listen to the call whilst recording it for analysis. There can also be some issues around yielding a clear sonograph, identifying bats when there is more than one call, and the conversion of a high-pitched call by the device into an audible sound that is still high-pitched.

Wildcare stocks all the major brands of Frequency Division bat recorders including Batbox & Pettersson. Take a look at our models that have a heterodyne mode if you want to undertake in-field identifications. If you require more from your device then we recommend that you consider Time Expansion or Full Spectrum devices.

Time expansion detectors are real-time devices that digitise bat calls at a high sampling rate, detecting and recording all frequencies, capturing quiet species & entire structures of calls. They preserve details of social calls & harmonics, giving you more data for identifications. Recordings are either made with an audio recorder or stored on an internal memory card.

In comparison to frequency division, time expansion does not involve the division of the signal but instead retains the whole waveform (frequency and amplitude). This means that the full picture is there, with a high-quality sonogram and real-to-life reproduction of sound, enabling accurate analysis and the identification of species. As the name suggests these bat detectors work by recording a short moment in time and elongating that recording by slowing it down by ten times. As a result, this lowers the frequency from ultrasonic to audible (Figure 3).

The main disadvantage with this type of detector is that it essentially does not listen whilst the extraction is underway - the device is 'deaf' to bats and could miss any that happen to be passing. There is a way, however, to overcome this shortfall – the detector can be manufactured with the capability of undertaking heterodyne and/or frequency division at the same time. The individual can therefore listen in real-time and decide when a time expansion recording is most ideal.

Zero-Crossing bat detectors, as the name suggests, provides a frequency/time output every time a sound wave crosses a set 'zero-point' (Figure 4). From this information, it can work out the delay between the 'crossings' (the time between is referred to as the division ratio). This is recorded and the use of appropriate software can yield information on the strongest frequency components of the call over time.

The main disadvantage of these devices is that they do not capture harmonics or amplitude information. They record the loudest frequency at any one time. Timings and triggers can be controlled, however, so they are definitely useful in remote locations. They are generally used alongside software and so are often deployed for long-term static surveys, due to their ability to record lots of small chunks of data and their low power consumption. They also reliably record every zero-crossing point - no triggers are missed.

The output that the operator sees are plots showing how frequency in calls changes over time. It doesn't give the original time-amplitude information but more of an interpretation of these. These devices are particularly unreliable for species whose harmonics vary a lot.

Full Spectrum bat detectors are the creme de la creme as they allow you to record original frequencies in an unaltered state & the full frequency range. They record when triggered by sounds within a specified frequency & amplitude range. These devices offer the ability to record continuously in real-time as per Frequency Division devices, whilst providing high-level detail much like Time Expansion devices. Because of all this detail, the file sizes can be very large so instead of recording continuously, they capture snapshots when they are triggered by predetermined frequencies and amplitude thresholds.

The recordable frequency is determined by the sampling rate where a sample rate of 256 kHz allows the recording of sounds up to 128 kHz (half the sample rate). Typically, recordings are made at sample rates between 200 and 500 kHz. The information captured can be displayed on spectrograms (Figure 5), with data on echolocation harmonics, and the power distribution of the signal being readily available.

Due to their technical capabilities, these devices tend to be useful for both active and static surveying. They are high in price and generally used by researchers and professionals. More information on full-spectrum in relation to zero-crossing can be found in this article by Wildlife Acoustics.