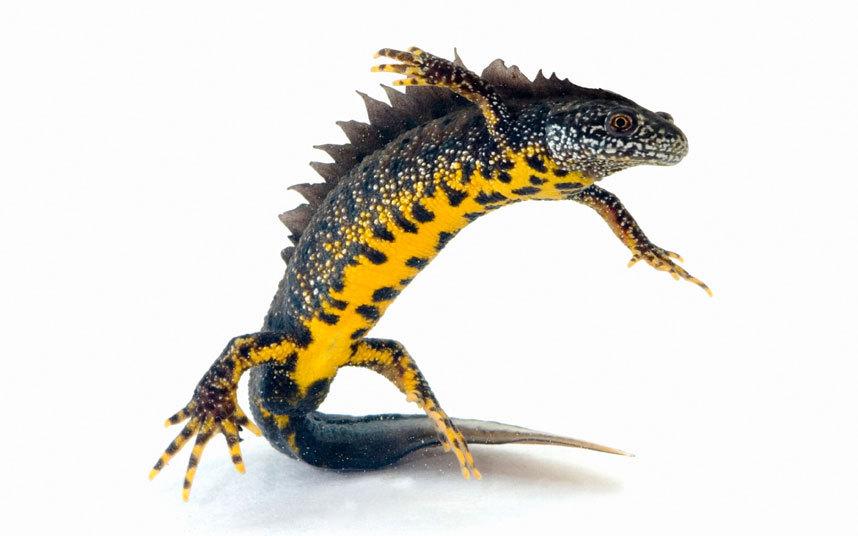 The Great Crested Newt is protected by law in Schedule 5 of the Wildlife and Countryside 1981 Act making it illegal to:

Further enhancing this protection is the EC Directive 92/43/EEC on the Conservation of Natural Habitats and of the Wild Fauna and Flora (the Habitats Directive 1992), Article 12, Regulation 39, which makes it an offence to:

GCN (as they tend to be called in the ecology world) are the largest of the UK newts, with adult males growing to around 110mm and females up to 170mm. They are easily distinguished from the Smooth and Palmate Newts not only by their size, but also by their darker colouring, warty skin texture, and the distinctive jagged crest on the male from which they obtained their name.

A cold blooded amphibian, they hibernate as soon as the weather gets cold in Oct or November, hiding out in dense undergrowth under rocks and debris or in mammal burrows.  The hibernation will last until there is sufficient external warmth for their bodies to get to operational temperature.

As soon as they are fully mobile, they will move from their hibernating habitat to a nearby pond, and likely one that they have been faithful to throughout their lifespan of up to 15 years.  Here they will breed, with the female laying her eggs on water plants, carefully wrapping each egg in a leaf.   Predation of eggs by fish is common, and therefore ponds where there are no fish are key Great Crested Newt breeding features.

Surveying for Newts is carried out both on land and in water, but the timing and methodology of these surveys is covered by extensive guidance by  government organisations such as Natural England, and charities such as Froglife

The best time for surveying newt ponds is in the hours of darkness when the newts will more likely be at or near the surface.  It is necessary to us a high powered torch with a long output time, such as the Cluson CB2 L2 or Clubman CB2  which are preferred choices for many ecologists.  It is also possible to deploy new traps, usually in the form of newt bottles.  These are simply a 2Litre PET soft drinks carton, with the top cut off and inverted.  Holes are made in the bottle and a bamboo cane passed through in such a way that an air pocket is retained in the bottle.   Newts enter the trap through the inverted top, and cannot find their way back out again.  Trapping GCN is not permissible unless you have a licence and even then, only between March and June.  In addition to bottle trapping, netting using specially designed dipping nets is also carried out.

Trapping GCN on land is done using pitfall bucket traps which are usually dug in to the ground adjacent to a newt fence. Or by hand searches through rock piles, under debris, or by using artificial refugia such as metal profile sheets, carpet tiles or squares of roofing felt.